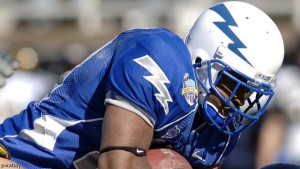 PASSING OFFENSE: B
Not bad. The Falcons completed 12-of-20 passes for 127 yards, a touchdown and no interceptions. Starter Jaleel Awini was solid going 11 for 18 for 89 yards. He had a 35-yard reception to Garrett Brown on the second Falcon drive. Late in the game Karson Roberts connected with freshmen Jalen Robinette for 38 yards. Robinette finished with a pair a catches. Brown finished and Sam Gagliano each finished with three catches. Air Force’s offensive line gave up one sack.

RUSHING OFFENSE: B
Again, not bad. Air Force piled up 367 yards rushing. The Falcons marched down the field on their first drive and Awini scored on a 33-yard run. Awini finished with 68 yards on nine carries. Jon Lee led the Falcons with 82 yards on just eight carries for a 10.2 YPC average. Anthony LaCoste had nine carries for 30 yards and a six yard TD run. He took an obvious helmet-to-helmet hit that should have been called for at least the 15-yards. Gagliano averaged 13 yards a carry on three carries. Broam Hart somewhat struggled gaining only 22 yards on six carries. Devin Rushing finished with 62 yards on 10 carries in fourth quarter mop up duty.

PASSING DEFENSE: D
Air Force continues to get lit up by opposing Mountain West passing attacks. On Saturday Wyoming’s Brett Smith finished with 373 yards while going 35 for 41 for four TDs and zero picks. The Falcons did at least get to him once for a sack and that kept this grade from being an ‘F’. It’s really discouraging that with so many secondary starters returning from 2012 the Falcons are still allowing this incredible passing yardage. It might be that Air Force just happened to play the three best passing teams in the conference back-to-back but too often we see Falcon defenders out of position to even contest a catch.

RUSHING DEFENSE: C-
Wyoming ran pretty much at will against the Falcons, piling up 249 yards on 44 carries (5.7 YPC). It was the Poke quarterback who did the most damage. When he wasn’t throwing the ball down field he was often running down field. He picked up 138 yards on 13 carries. He had a 6-yard run in the second quarter that put the Cowboys up 35-17. Other than Smith, the Falcons did a decent job of stopping Wyoming on the ground. Starting tailback Shaun Wick averaged only 3.7 yards a carry in gaining 55 yards but he was able to score twice. Linebacker Joey Nichol continues to be one of the bright spots for the Air Force defense. He had a dozen tackles including six solos and 1 1/2 tackles for losses.

SPECIAL TEAMS: B
Will Conant made 1-of-2 field goal attempts. He made a 33-yarder in the first quarter which gave Air Force a 10-7 lead. He was wide right on a 44-yard attempt late in the third quarter. David Baska continues to be solid a as punter. All three of his punts went for more than 40 yards (44.3 YPP). He had one go for 49 yards which went out at the Cowboy 11. Devin Rushing returned one kick off for 42 yards. Garrett Brown lost 8 yards on his only punt return. There were no major breakdowns by the AF return coverage teams.

COACHING: C
The Falcons are having serious problems with their passing defense. The field day that opposing QBs are having throwing the ball is opening up the running game. The Falcon staff seems to have no answer for these prolific passing attacks. Other aspects of the game seem to be fine. The offense is progressing despite the starting quarterback not playing, special teams looks solid.

OVERALL GRADE: C
It’s been a rough 3-game stretch and the Wyoming game turned out to be the ugliest of the three. Air Force must put this behind them and focus on a very beatable, less passing, Nevada team. If the Falcons can regroup and improve on a few weaknesses while honing some of their strengths they can pick up a win this week before the trip to Annapolis.

Here’s a list of the 2015 Air Force football signees.

Tuesday was a special day for the Air Force Falcons who visited the White House and President Donald Trump. The Falcons won the 2016 Commander-in-Chief’s Trophy by defeating Army and Navy. Look inside for video […]